Posted on July 2, 2010 by africainteractiveblog | 5 Comments 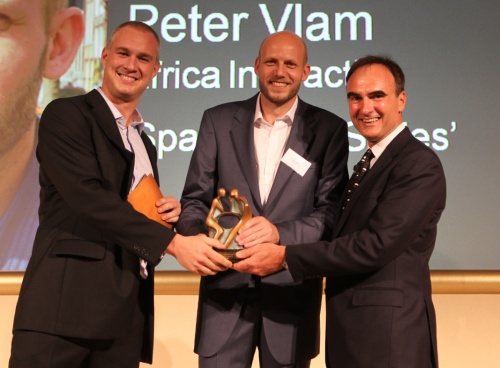 Now in its seventh year, the Diageo Awards are a celebration of journalists and news organisations who have gone the extra mile to promote the African continent. This year a record 770 entries were received, demonstrating increased reporting and competition in these Awards.

Winners from the eleven categories came from nine different countries, including winner of Media of the Year, which went to Business Day in Nigeria. Peter Guest, editor of This is Africa, was named as Journalist of the Year and the Best Newcomer title was awarded to South African Gemma Ware, writing for The Africa Report. A full list of winners can be found here.

All Spark Africa items are produced by African media professionals (research, presenters, camera men/women). They produced this series in cooperation and on behalf of Africa Interactive (editing, script writing, coordination, financing). It is our vision to work with local reporters.

The series is published on leading Dutch websites like Volkskrant.nl, NuZakelijk.nl, RTLZ.nl and Radio Netherlands Worldwide. Each week we reach thousands of viewers.

Spark Africa is paid for by the Dutch NCDO. This organisation involves people in the Netherlands in international cooperation.

We produced items on the fashion industry in Mali, the Zazu horn in South Africa and the bee sector in Ethiopia – to name a few.

This entry was posted in Uncategorized. Bookmark the permalink.